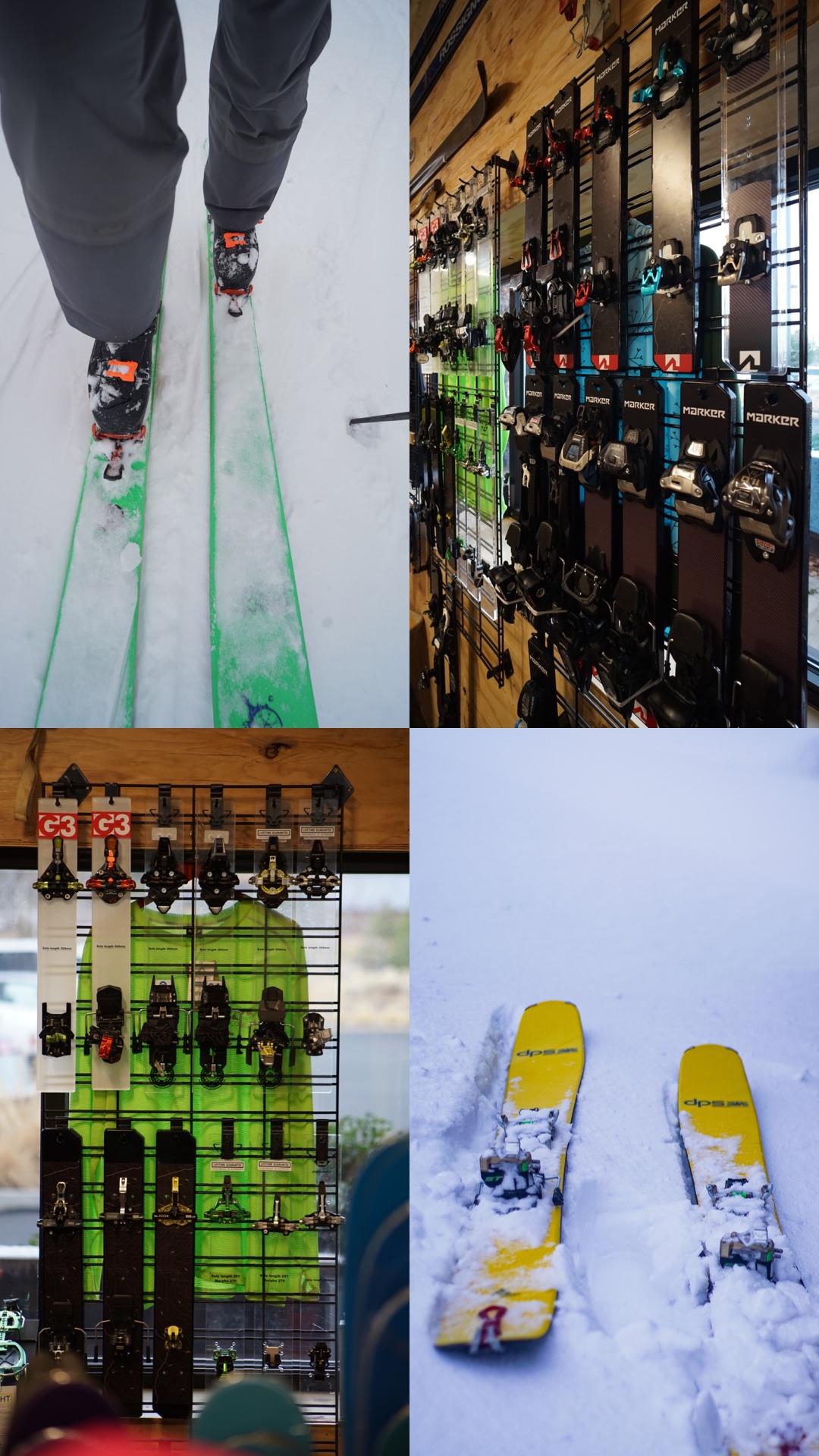 How to choose an Alpine Touring Binding

A decade ago choosing an alpine touring binding was easy. You could choose from one of two main styles, frame or pin bindings. Frame bindings featured a binding that stayed locked to entire boot and would lift off the ski when touring. This style was dominated by brands such as Fritschi, Marker, and Silvretta. On the other hand, pin bindings were all made by Dynafit who owned the exclusive rights to this technology. These style bindings featured a pin tech system that held you to the ski by the toe and and the heel independently. This allowed the boot to disconnect from the heel and the toe to pivot freely while touring. This meant that the entire weight of the ski would stay on the snow surface without lifting the binding. These bindings also required less materials and therefore weighed less.

The advantages of the tech bindings were obvious and as a result, touring boot manufacturers began to include Dynafit "low tech" toe and heel attachments to be compatible with both styles of bindings. However, that was the most other brands could get involved with the new technology until one fateful day in 2008. Shockwaves were felt around the world, similar to the global financial crisis, when Dynafit's patent on "low tech" bindings ran out. When this happened it was off to the races for binding developers around the world to design their own rendition of these bindings. Since then the sport of ski touring has exploded, and as a result the vast majority of R&D dollars have gone into the tech variety.
Nowadays the decision of which tech binding to purchase is more difficult than it once was, let's figure out how to get into the best tech binding for you.

Tech or Frame?
This one is easy! Tech! There are a select few customers out there that will use the frame option. But since the introduction of bindings like the Shift, and Kingpin, these skiers are becoming fewer and farther between. Professional freeriders who have the camera on them while they huck a 50+ foot backflip will often prefer a frame binding. However, guys like Eric Hjorleifson (Hoji) have proved that massive landings are possible in a beefy tech binding. Other specific niches such as a heli skiing (because that's a quiver spot for some folks!) or the resort skier that wants to have the touring option for a day or two a season while bridging in to a tech setup.

For the rest of us 99%ers, go tech! The advantages to a tech toe are plentiful including a more natural pivot point, lighter overall weight and keeping the entire weight of your setup on the snow. Traditional;y, the hesitation for choosing a tech binding was the fear of pre-release due to lack of retention or elasticity in the toe. Thanks to all of those R&D dollars we were talking about, there is a tech binding for every application. Ultra lightweight options like the Dynafit Speed are perfect for hard charging backcountry crushers, while bindings like the Salomon Shift feature a fully releasable toe for every day use in resort.

In fact, bindings are the first place we will try and save weight in a ski-touring setup. Unless you plan on skiing your setup in bounds consistently, or you plan on skiing a really fat ski, there is no reason to go with an alpine style heel. Tech bindings offer all the retention and trust you could ever need, and we have thousands of happy customers to back up that statement. With that being said, the main drawback of lightweight offerings are lack of elasticity in the toe, and lower power transmission in the heel. For these reasons, there is still a place for these tech/alpine hybrids in quivers. When your ski setup is predominantly spent on resort, you will appreciate the added forgiveness and performance of one of these hybrid offerings.

Tech Binding Manufacturers
The major players in the North American market are Dynafit, and G3 along with alpine binding gurus Marker, and Atomic. We also carry harder to find brands like Hagan and ATK.  It would be our dream to carry every tech binding under the sun, but that becomes redundant and there is poor support for parts, warranties, and knowledge in North America with some of these smaller European brands. There is nothing worse than breaking a binding and losing your winter season waiting for a replacement from Europe. That said, all manufacturers are making great systems, and each have their own awesome contributions to the evolution of the tech binding. So choose based on use and features, while knowing that your binding comes from a reputable company.

Tech Quiver Binding
To the applause of gear junkies everywhere and to the dismay of skiers on a tight budget, even the tech binding world has quiver slots within this already small niche:
1) Race and Fitness Bindings: These bindings may look like mouse traps for your boots, but their retention is incredible compared to their weight. Today's race bindings will typically weigh less than 150 grams per bindings. If they feature an adjustable track for multiple sized boots, the weight can creep to what is still an astonishingly light 180 grams. A race binding is for the minimalist, for they usually have no adjustable release values and usually just one level of touring height. Put a race binding on your ski if you like to hammer up and every gram matters to you. It is important to pair them with a super light boot that has a great range of motion to compensate the lack of variation in riser height.
2) Ski Mountaineering Bindings: For skiing big peaks and long backcountry tours weight is still important and many skiers will still choose a race binding. However, functionality is more important as touring becomes more consequential in the high alpine. For steep climbing it helps to have a higher riser height options for long approaches and varying grades. Brakes may also help reduce the stress of stepping into a ski on top of windy and icy ridge and may be worth the weight penalty. Most ski mountaineering bindings have some adjustable release value, but typically will have less adjustability than all mountain and freeride options. This is often seen in only lateral release adjustability in the heel, fixed for vertical. Weights will range from 150-400 grams.
3) All Mountain Touring Bindings: If you are tired of quivers of ski equipment these bindings will take care of the research. They are still light compared to any frame binding, but will be fully featured and bomber for the ski down. All of these bindings will include brakes, adjustable release values, and multiple riser heights. Every year we see more and more of these used at the resort as skiers find their touring boots and skis to be their favorite gear- even when riding lifts! Weights will range from 300-600 grams.
4) Freeride Touring Bindings: These bindings are beefy and will match any full downhill alpine binding in performance and reliability. They can drive the biggest skis and weight savings are always the last concern. If you charge hard at the resorts and want to make sure you can do it on your new powder touring ski, these bindings are for you. One key characteristic here is forward and/or downward pressure from the heel of the binding similar to an alpine binding. Several manufacturers such as Marker and Diamir have alpine-esque heels. Weights will range from 500-800 grams
5) Blending the Categories
These categories are a great way to begin the search process and help to put together a setup. There is always crossover between the pieces of a setup to accommodate more specific needs. One example typically found with bindings is the use of a ski mountaineering binding with all mountain or freeride boots and skis. This is usually an experienced backcountry skier that skies hard and fast, but understands that these little mouse traps are truly impressive in their retention capabilities! We will also see the reverse sometimes with casual ski tourers that aren't looking for speed up or down. A fully functioning all mountain touring binding is then chosen and paired with lighter boots and/or skis to remain weight conscious.

To choose your tech binding, begin with its intended use and/or quiver slot. Then consider the specific functions of each binding to narrow it down within that range. If you decide that you want to use a binding slightly different than it's intended purpose- go for it! Just remember that you are making small sacrifices one way or the other. Still can't nail it down? Give us a call, email info@cripplecreekbc.com or ask a question below and we will get it dialed in.