High performance base treatment for skis and snowboards - Apply once, glide forever!

PHANTOM is a permanent, one-time application base treatment that 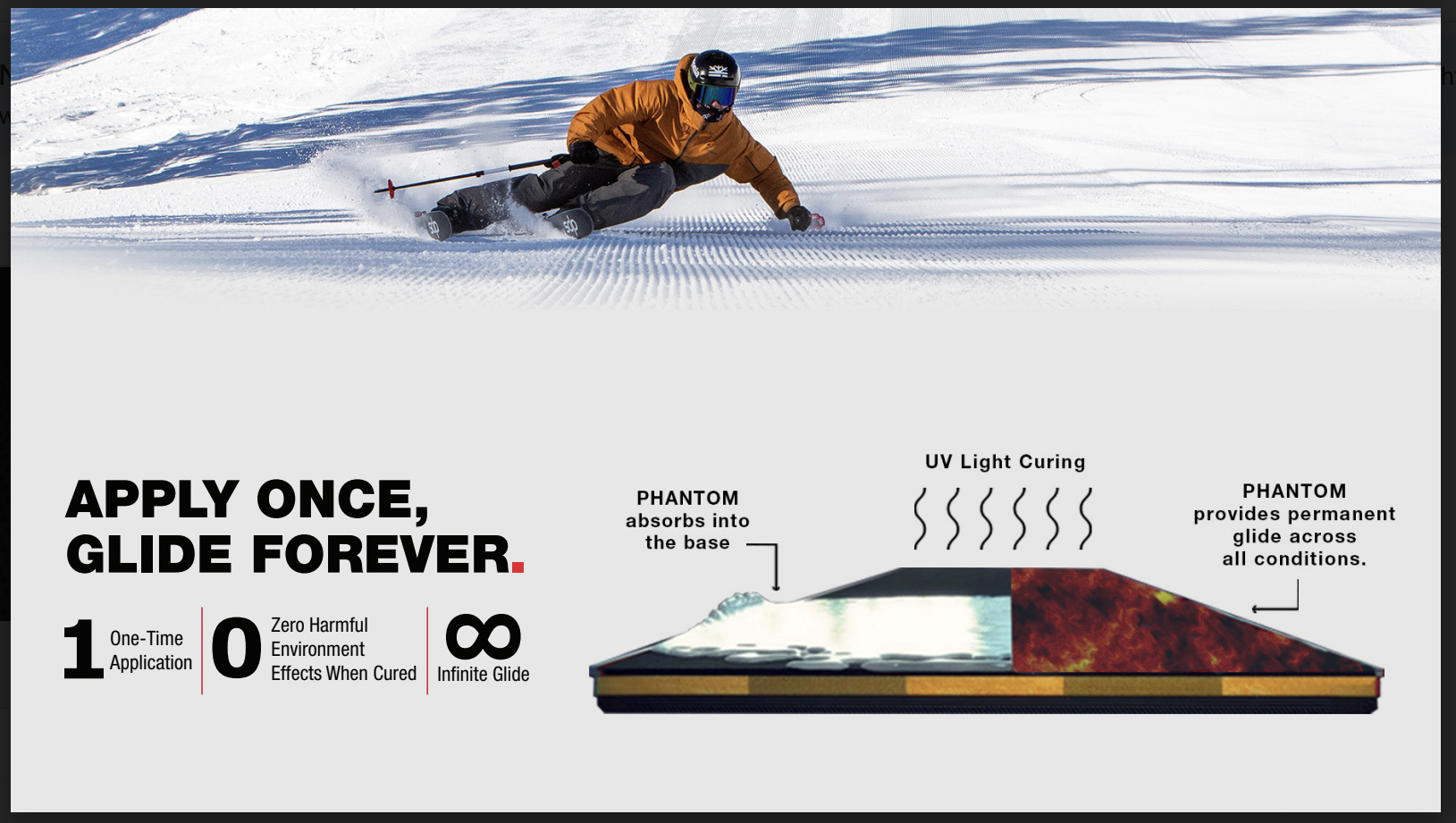 provides increased glide across all conditions.  PHANTOM's sophisticated, timed polymerization process permanently penetrates deep into the base material with powerful go-fast fluoro compositions designed to operate across all snow temperatures.  Even when ski or snowboard goes into shop for stone grinding, the next fresh layer of PHANTOM is exposed - ready to glide.

Phantom was developed originally to help reduce the amount of flurocarbons that end up in our drinking water from ski wax...which was pretty bad for awhile there!

Don't call it WAX! - Phantom is in no way whatsoever a traditiional, topical and temporary wax.  It is UNIQUE base TREATMENT.  Applied once, lasts forever as a medium temperature base treatment.  You can still wax for extreme high temperatures and low temps but for medium temps like we have here in Central Oregon its about perfect.

Another bonus to Phantom for backcountry skiers and snowboarders is that your climbing skins will stay fresh longer as they do not remove wax everytime you pull them off to ski down.  Over time and many removals this can cause your skin glue to become less sticky and your skins won't stick to your bases.  As Phantom is NOT wax there is no wax transfer to your skins.

Ask us about Phantom next time you're in our Northwest Crossing shop.

5 stars
The most common question we get about the Phantom treatment is whether or not it actually does anything. Having Phantomed every ski in my quiver (except the buster rock skis), I can definitively say that it makes a big difference. While the Phantom itself isn't exceptionally fast, it is a whole lot better than a dry base. Though I do use liquid wax on my skis, I have not at any point this or last season though "gee I need to re-wax these skis" because the Phantom keeps them moving long after all the wax has been stripped off. While the improved wax-less performance is very nice, I have found that the biggest boon of the Phantom is the CONSISTENCY of the ride. Going from cold snow to warm, or ice to nearly-slush, the Phantom is far more consistent over changing snow types. Especially in the spring when the snow is either heavy or frozen, I don't feel any "lurching" if the snow under my skis changes. As a teleskier who previously broke a collarbone by hitting a patch of wet snow, the ability of my skis to hold speed moving into sticky snow is utterly invaluable, and it also makes the ride-out to the car on mushy snow a LOT more enjoyable. These days, I hardly worry about wet snow as the Phantom immensely smooths the transition and reduces the drag on the base by an honestly impressive amount. After 2 winters of skiing on Phantomed skis, I will be Phantoming every new pair of skis I henceforth acquire for the quality-of-life improvements to how the skis ride. Though I can't say conclusively whether DPS's claim that the Phantom also strengthens the base material, my skis do seem less scratched at the end of the season than they typically are, but there are a lot a factors that could be responsible for that.

5 Stars
I have had PHANTOM professionally installed onto two of my snowboards. The consistent glide provided by PHANTOM makes equipment maintenance easy. Instead of waxing my boards every 3 days or so, I get my equipment sharpened when I can't hold an edge. Not as quick as race wax, which PHANTOM is upfront about, but can still add temperature specific fluoro wax when I do hit the race course. Skimming reviews, I saw some negative ones regarding self installation. Unfortunately, I cannot speak to that but can say that professional PHANTOM installation has worked great for me!

4 Stars
DPS Phantom will be applied to every ski I own until they come up with a base that does not require waxing. My experience with DPS Phantom is 3 seasons so far and they have provided me with exceptional glide. That's approximately 100+ ski days. The only time they underperformed was when it was -30 Celsius. I highly recommend DPS Phantom.

5 Stars
I've had Phantom on 3 pairs of skis over the last few years. They hype is real, my skis have stayed fast all season without having to wax. I still enjoy tuning skis so my family members' skis still get wax a few times throughout the season. For my skis, I focus on edges and brushing the base (got a rotobrush last year)
© Copyright 2022 Crows Feet Commons. All Right Reserved